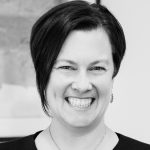 Kylee previously worked at Melbourne Water for eight years. Her main role was in the Development Services Team where she assessed development referrals, undertook flood mapping projects and worked in teams assessing State Government major infrastructure projects. Kylee maintains good connections with her colleagues at Melbourne Water and her knowledge of the processes by which they operate has proved invaluable to securing development approvals.

Prior to joining WMS, Kylee worked for a year at Entura, a specialist power and water consulting firm. A component of their work was consulting to Hydro Tasmania, which is the main energy supplier for the state of Tasmania. Kylee honed her skills on dam break and consequence assessments, work which she is now undertaking for WMS.

Water engineers need to understand technical language and the science of how water flows. What sets Kylee apart from others is her ability to communicate with developers, councils and other stakeholders like Melbourne Water to explain the methodology behind technical flooding concepts.

Kylee’s demeanour is refreshing. She’s quite a bubbly, personable person. She’s just really clear in terms of how she provided advice to both us and Council.

Simon understands the importance of clear communication. He was working on a retirement village project for a client, when a small retaining wall became an issue after a neighbour complained. Council wanted an updated catchment model for the whole site. He says, “Kylee was really good in terms of articulating to council the background of flood modelling on this site… so she worked with council engineers to get them to understand the methodology and the reasons behind her approach.” Simon adds, “She’s really good at exercising her previous relationship with the Council staff and breaking down some of the barriers you potentially might find, which was really helpful.”

Kylee is also known for her thoroughness, producing detailed reports and plans that meet the client’s brief. Brendan Papworth, from Papworth Davies has been a landscape architect for close to 30 years and can vouch for Kylee’s professionalism and quality work. Brendan came to know Kylee during what he describes as “one of the most significant projects of my career”. He was tasked with redeveloping the Warburton Swimming Pool (closed for a number of years) into an outdoor area with playgrounds and splash parks. However, the pool was located in deep flooding within the Yarra River floodplain. Construction had already commenced and the first stage of the park was almost complete when he started looking for a consultant to prepare a Flood Response Plan. Even though the design had taken flooding into account, the Flood Response Plan was critical and they needed it done quickly.

Kylee came through and delivered a very detailed Flood Response Plan that included an analysis of the current flooding situation, flood levels and rainfall depths at which evacuation would occur, contacts and media sites to obtain rainfall depths and weather alerts, evacuation procedures and routes, signage, education, management and maintenance of the plan. You would think such a critical report under time constraints would be stressful but Kylee “really enjoyed that work” and described it as “fun”.

Kylee explains that unlike other sites along the Yarra River, where the Bureau of Meteorology maintains flood warning gauges, this site had none. She says, “We weren’t able to put in a traditional ‘Minor–Moderate–Major’ flood warning system for the park. So we had to find an alternative methodology. We developed a two step procedure to identify when to put the Flood Response Plan into action and when to start evacuating people.” Kylee took into consideration that the site’s users would be predominantly families with children and possibly elderly people, and the difficulty in moving such a crowd quickly. It was therefore important that the research was thorough and provided the safest plan possible.

Kylee was an absolute pleasure to deal with. She was terrific. She met the deadline. The initial report was great. The various feedback that I provided by myself or through council was attended to. I’d absolutely recommend her. Having relationships with other consultants and being able to trust them and appreciate their work is important. And Kylee is one of those people.

Joe Cornetta of Cornetta Partners Architects is another person thankful for Kylee’s ability to think outside the square. He had drawn up plans for a client project on a very complex site which sloped dramatically to the rear. The site would be affected by an overland flow path and Melbourne Water rejected the design. He approached a couple of consultants to write a report to try and get the project across the line, but nobody wanted to touch it, saying it would just be rejected by Melbourne Water.

This is where Kylee’s knowledge of Melbourne Water processes from her time working there, and relationships with current staff, comes into play. In this case it proved the difference between rejection and acceptance of the project.

Kylee prides herself on building a good relationship with clients at the start of every project. She says, “If I have to deliver bad news down the track, it’s much easier.” But Kylee isn’t content to just deliver a decision. As she explains, “I always try to go to them with solutions where possible.”

This is exactly what she did with Joe’s project. Kylee was straightforward and said to him, “I don’t think it’s going to get over the line with Melbourne
Water for these reasons. Do you have any flexibility or room to move? And are you able to make any adjustments to the design?” Joe appreciated this
approach. From his perspective, Kylee was asking, “What would they be prepared to accept? And then we could design our building to suit. Which I thought was a really clever way to do it.”

Joe goes on to explain the enormity of what was achieved by Kylee. He states, “That’s not easy to do because there isn’t a formula. You have to negotiate… that was the key thing. Her intimate knowledge of Melbourne Water meant that she could gain an understanding of how they thought, their thought processes”. After a number of months, the project is now close to approval and Joe says the clients are “absolutely delighted with that outcome.”

Kylee is keen to work with more developers in the future. She is full of enthusiasm when discussing development projects and believes her time at
Melbourne Water gave her great insights. She says, “I love it. I really enjoy that pre- and post- flood impact assessment type of work.”

Kylee also recently joined the Urban Development Institute of Australia, the peak body for developers. She hopes to join courses and networking events so she can further build on her connections within the industry.

Kylee and the team at WMS are excited for the future and the contribution she can make to development projects: “If they have my input, it’s ensuring that development is sustainable and flood free and does not impact adjacent waterways or overland flow paths.”